Will BTC’s 70% Dominance Soon Give Way to an ‘Alt-Season’?


Things have been pretty peachy in BTC world for the past several months. After the “crypto winter”, a year of price drops and doldrums, crypto spring sent BTC rising back up; crypto summer has sustained the price over $10,000.

Now that we’re entering into autumn, a rather unique set of circumstances has the market poised to move in either direction. Perhaps most notably is the fact that for the last several weeks, BTC dominance–the ratio of capital in Bitcoin markets to the amount of capital in altcoin markets–has been hovering around 70 percent, the highest that it has been since July of 2017. 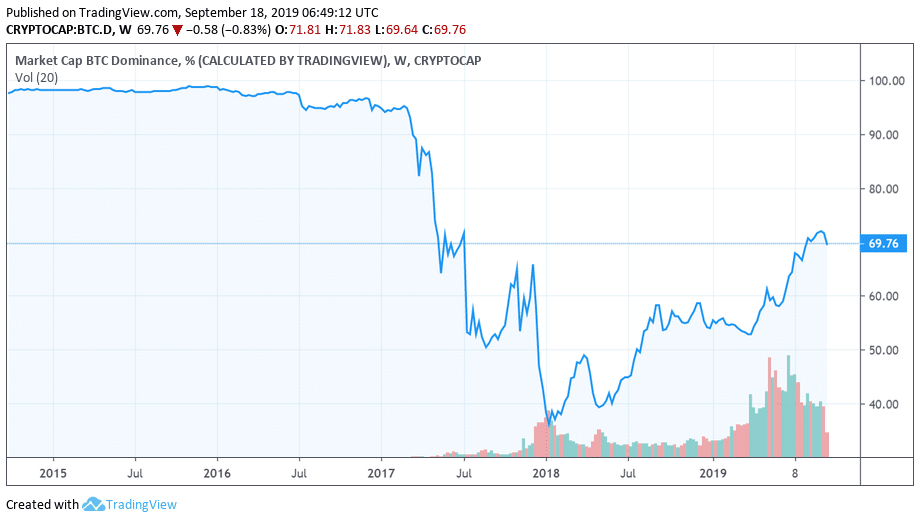 Marc Bhargava, Co-founder and President of digital asset trading platform Tagomi, told Finance Magnates that that figure could be even higher.

“[The] key insight here is that dominance is actually higher than reported since more of the alt market caps are not liquid. BTC dominance could be closer to 80%,” he said. “On CoinMarket Cap, it says bitcoin dominance is 68%, but includes a lot of questionable exchange volume plus many tokens outside the top 15 which really aren’t tradeable in meaningful size. Therefore, the market caps are not correct.”

The rise began to pick up speed in late April, several weeks after the first in a series of strong upward price movements in BTC. On April 1st, the price of BTC was roughly $4,132; by the end of the month, it had surpassed $5,200. At press time, BTC was trading for $10,270, up a fraction of a percent over the last 24 hours.

What’s driving Bitcoin dominance up? And where do we go from here?

Bakkt launch could be driving both BTC price and BTC dominance

Several events over the course of the last two months have been speculated as the driving force behind the latest upward movements in BTC dominance.

The most “popular” theories seem to be connected to two announcements of institutional products: first, the announcement that the Intercontinental Exchange-backed cryptocurrency futures trading platform, Bakkt, will finally launch after a year of delays; second, the launch of VanEck/SolidX’ so-called “limited ETF”, and the upcoming October SEC decision on the full ETF.

A number of analysts have predicted that the launch of Bakkt will bring a wave of institutional capital into cryptocurrency markets (particularly Bitcoin’s); as such, it’s possible that a number of holders have been stocking up on BTC in anticipation of a possible price run.

Alternatively, institutional traders may even already be depositing BTC into Bakkt trading accounts in preparation for the launch.

Could ETF drama be a factor?

The launch of the so-called “limited ETF” by Van Eck and SolidX did not bring in nearly as much capital or interest from investors as was originally anticipated. As of September 12th, roughly $41,000–the equivalent of just around 4 BTC–had been invested in the product.

Still, the launch of the limited ETF has brought more media attention onto the fact that the SEC must make a final decision on Van Eck/SolidX’ application for a Bitcoin ETF this coming October, after months and months of delays.

However, in a LinkedIn post, Michael Creadon, Head of Institutional Sales at DrawBridge Lending, warned about the possible negative consequences of this limited ETF: “I get nervous when I see stories about backdoor, ‘technical’ SEC rulings,” he said, referencing the fact that the limited ETF was created on the basis of SEC exemption 144A.

“All the SEC rules are technical. Do you mean to tell me we’ve been awaiting BTC ETFs for 5 years & only now some attorney cracked the code & read the entire rule book? I’ll give an example: our firm can’t face retail investors because we use swaps. That’s the rule–period.”

Creadon also pointed out that the media cycle–and the price movements that have followed–surrounding the Van Eck/SolidX Bitcoin ETF has all become a bit too speculative: “coming from Chicago where futures and options rule supreme I think the BTC ETF melodrama is a bit overblown,” he wrote. “but hey, all new derivatives are a positive and I respect the heck out of the Van Eck team’s perseverance. And I hope that this approval’ is fully in lockstep with the regulators in Washington so we don’t have to take another mulligan.”

When compared with BTC, altcoins are way down

Whatever the cause, crypto market analyst Willy Woo pointed out that the effect of the rise in Bitcoin dominance has been–well, not great.

This becomes particularly clear if altcoin prices are measured in BTC rather than USD. Woo showed this in a rather aesthetically pleasing chart on Twitter:

This is the performance of the the top 200 coins measured in satoshi value (performance against BTC).

Note alts got particularly rekted after BTC broke out on 1st Apr. pic.twitter.com/lN3Jdnsfni

Ark Invest crypto analyst Yassine Elmandjra made a similar point in a separate series of tweets.

from when their current USD price levels were at highs in BTC terms.

Are we in store for an “alt-season”?

But perhaps Bitcoin’s dominance could eventually benefit altcoins in a meaningful way–after all, the “alt-season” phenomena that showed a repeated pattern of increased capital in altcoin markets following boosts in Bitcoin could point to an eventual recovery.

If you’re selling your alts here, you are doing this wrong

You don’t get charts more beautiful than this one

If we get a nice consolidation after hitting the top box, continuation as squigly is likely

If not, still a monster rally pic.twitter.com/5hTjRrOuAI

Similarly, self-described “CryptoGem finder” Faisal Sohail proclaimed that the next alt-season is right around the corner.

I’m not the kind of person who follows the herd, so contrary to what the masses believe, I hereby declare that #altseason is very close. 💯

Your patience will truly be tested in the next seven days before Bakkt launches.

Where is this all headed?

So, if altcoin markets continue to stay strong–or even grow in strength–how will BTC’s dominance and price be affected long term?

Mati Greenspan, senior market analyst at eToro, noted in a tweet that “Bitcoin dominance is now comparable to where it was before there was even a developed market for altcoins.”

“Hard to see it getting much stronger than here,” he added, suggesting that this is the limit for BTC given the number of altcoins currently on the market.

Bitcoin dominance is now comparable to where it was before there was even a developed market for altcoins.

Hard to see it getting much stronger from here. pic.twitter.com/pgfNWLQipr

Indeed, Bitcoin dominance hasn’t been this high for more than two years, and the number of altcoins has grown significantly during the same period. However, altcoins have been a significant force in BTC markets for far longer than that.

“There was a thriving market for them, on an understandably less grandiose scale, during the bull market of 2013,” wrote crypto journalist Richard Delaney in a piece for NewsBTC earlier this week. “The names might have been largely different and the sums of money smaller, but for those in the industry at that time, the hype was comparable.”

Willy Woo drops the mic: market corrections are yet to come

However, Willy Woo pointed out in a series of tweets that altcoin markets still haven’t completely “detoxed” from the hype cycles that took place at the end of 2017.

If this level fails, I’d expect roughly a 60% drop relative to Bitcoin’s cap before we some the next area of support. pic.twitter.com/FpOIIjVeqD

“Fundamentally, though alts are screaming in pain, these two charts show how they have not yet detoxed from 2017 bubble valuations,” he wrote. “Though locally oversold and may see some bounce in coming weeks, longer term, into 2020, I can’t see these levels holding (relative to Bitcoin).”

The 2017 gap that opened up was made of ponzi fluff, ERC20 ICOs investing in other ERC20 ICOs blowing up their combined caps like a fiat money printing machine. pic.twitter.com/78Qq16NRmr

In any case, the market is poised for a powerful move–only time will tell what happens next.